Thus far today I have:

SO!  You know when your grandmother gets a new vacuum cleaner and calls you to come over and put it together?  And you know when you tell your tool-loving son that he can come too, so he excitedly grabs his favorite taggie, and runs across the street to help?  Then you know when you’ve got it all together, and the hose is lying on the floor, right in front of said favorite taggie, and you plug in the vacuum, not knowing it was on, and you underestimate the powerful sucking capacity of a brand new vacuum, and right in front of your son it sucks up taggie?  AND THEN you know how your son will look at you like you just betrayed him in the worst way by killing his best friend?  You know how you will dig out taggie from the canister, and he’ll sit in front of the washing machine, watching it spin, quietly sobbing, while you’re pretty sure that you’ve just ended your son’s childhood?  You know that feeling?

When Rowan is feeling particularly giddy, he lets out a high-pitched giggle that could rival even the cutest of little girls in pigtails with bows.

A couple of days ago I set out some dried beans, peas, and pasta for Rowan to “cook” with.  It was an attempt to beat the heat, the rain, and the cold he just can’t seem to shake.  While he was napping I set up a work station with dishes, cups, pans, spoons, and lots of other tools needed for a gourmet meal.

The following is how we spent our afternoon. 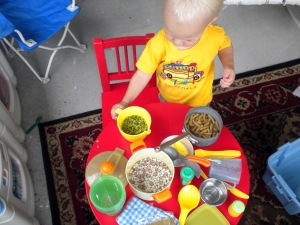 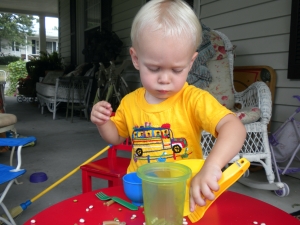 Picking up beans with tongs is harder than you think!

I think he had fun!Sweet boy.

I’m the first to admit that I was ashamed to say it.  My parents moved here about four years ago, and all I could say was, “Why?”  I was currently living in a “cool” place, California, and thought I was cool because of that.

I had never really given any thought to this state.  I had the television, hillbilly, white trash version of the place, and I was naive enough to believe that’s all there was to West Virgina.  I’m also the first to admit that I was wrong.

There are some things that I’m not overly fond of, like the school system.  And the lack of organic products, and places to recycle.  There aren’t many things for young kids to do, and you have to travel an hour and a half to get to a decent store.  Personal health isn’t a big priority, but we’re working on it.  These are all things I can deal with for now.

All in all, it’s a wonderful place to raise a young man for the first few years of his life.  I hope that he picks up the gentlemanly way of life, and learns to open doors, and pull out chairs.  It may seem old-fashioned, but I think the world needs a little more of that.

When I first moved here, I made some snap judgements that weren’t fair, or justified, and for that I apologize.

I didn’t take pictures of the tin-foiled underwear, socks, and other random items.  I was still unwrapping things a week later.

Not to mention how they were dressed when they picked me up at the airport.  They even had the security guards in on it!

And now I will die for posting that picture….

It was brought to my attention that some of the people reading this don’t really know much about me.  SO, I am going to open this blog up for questions.

Ask me something.  Anything.  Go ahead.  I will make a separate post in the near future with the answers.  You can post anonymously if you wish.

That being said, I will not promise to post every single question and answer.  I do promise to be honest in the answers I choose to post.

I hadn’t always planned on co-sleeping with Rowan.  The day I brought him home, I gently placed him in his cradle, underneath the window in my room.  I had lovingly made it up with a bumper, a playful sheet, and the softest blanket I’d ever felt.  The second his head hit that mattress, the screaming started.  I hushed and sang and patted and soothed as best I could.  He would have none of it.  I picked him up, and placed him in the warm spot on my bed.  Immediately he snuggled in, and fell asleep.  I crawled in next to him, and he sighed contentedly.  From that moment, I was hooked!  I knew he would spend many nights dreaming next to me.

Sure, I have to put up with his talking in his sleep.  Don’t get me started on when he sings!  He’s a twitcher and a kicker, and oh boy does he like to cuddle!  He snores from time to time, and I’m pretty sure he “eats” in his sleep.  I’m a seriously light sleeper, so the slightest movement from him wakes me up.  I don’t mind though.  It reassures me that he’s alive and well, and thriving.

When Rowan turned one, he received a toddler bed from his aunt.  For several months he played on it, and pretended to sleep on it.  There were tea parties held on it, and lots of matchbox cars drove on it.  Finally he decided he was ready to spend a night in it.  I set the bed up right next to mine and nursed him to sleep.  It was a proud night for both of us.

To this day he continues to fall asleep in his own bed, and then crawls into mine when he wakes up.  As I type this, his head is firmly planted into my hip, his Taggie hanging over the side of my laptop, which I continually have to push out of the way to get to the right side of the keyboard.

Tonight Rowan woke up at 9pm, and I was still out in the living room, finishing up some side work I was doing, so I can get paid tomorrow.  Instintively he got into my bed, only to find I wasn’t there.  He started to cry and call for me.  “Mom!  Please Mom!  Are you? (Where are you?)”  While it was hard to hear him upset that I wasn’t there exactly when he wanted me to be, it was good to know he knew where to go.  He knew that eventually I’d be there to help him calm down, let him know he was safe and that it was okay to settle down and go back to sleep.  And he did, without the aid of milk or water or even me holding him.  He just wanted to know I was there.

Rowan is almost two years old, and I catch some slack for still nursing him and co-sleeping with him.  But you know what?  At the end of the day he knows he’s loved and wanted and protected.  He’s confident in the fact that his mom will always be there when he needs her.

That’s how I know I’m doing something right.

So much to write about…so little motivation.  🙂

We’re toying around with potty training.  Rowan has been informing me immediately AFTER filling his shorts, and wanting to sit on the potty.  The big one, not his, of course.  SO, yesterday he got to spend the entire afternoon in underwear.  He stayed dry, but didn’t go on the potty either.  I don’t think he’s seriously ready yet, but that kid sure can strut around in his skivvies!

I made an offhand comment about Rowan, “Popping grapes like they are candy,” and now he thinks that they are, in fact, candy!  Fortunately, the grocery store in Lewisburg carries organic produce now, so I’m all for letting him think he’s getting away with eating candy all day.  I play into his delusion by telling him he’s getting a special treat every time.  His reaction to being allowed GRAPES! FOR BREAKFAST!  is classic.

Word is getting around this small town of my superb cleaning skills, and more job offers are coming in.  It’s great that I can pick and choose the ones I want to do.  I don’t generally base them on how much they pay, but on how nice the people are to work for.  I’ve lucked out and work for wonderful folks that are grateful and appreciative of the work I do.  Until now.  On Tuesday I am going to interview for a lady that is notoriously picky.  Nothing is ever good enough for her, and she can be quite abrasive.  The thing is, all she wants done is her hardwood floors.  She well off, and pays quite well.  I’m thinking I can put up with her attitude for a couple-hour a week job.  Besides, I’m a tough chick.  I can handle whatever she throws out at me.

I’ve been promised the opportunity to shower today, and I’m not one to miss out on such a luxury, so I’m off!

Have a wonderful Sunday!